Its name is Shades and it’s the new album of Quarion, also known as Yanneck Salvo.

Released on September the 27th and will be available in digital format and double vinyl.

After years of silence and after decades of EP released on several prestigious labels, the Swiss producer decides to group nine tracks published by the Compost / Drumpoet label. A mature and very significant job.

We already understand it from listening to the first track (after the intro Turquoise, elegant opening to the disc) Indigo, it is one of those pieces that takes you by the hand and brings you into a new world, an 8-minute loop with dinghies and footage that never go too far from a refined and conscious track of what the artist wants to convey. The mood becomes deeper with the subsequent Periwinkle, even if the leitmotiv remains more or less always the same: rolling synth / bass with basic melodic openings, they represent a concreteness of other times that exudes a sure efficacy on the darkest dancefloor.

Cobalt is the bearer of even more leaden clouds but perhaps represents the most successful moment of Quarion’s stylistic code, a decisive and functional rhythmic structure, where harmonic experiments of hypnotic sounds are supported. After this first part of the trip, Ultramarine is a refreshing dip, an experiment of about three minutes that introduces us into an underwater world right in the middle of the disc, before resuming then with Sapphire in which echoes of distant voices seem to recall sirens that hypnotize us on a straight but soft case, never arrogant. 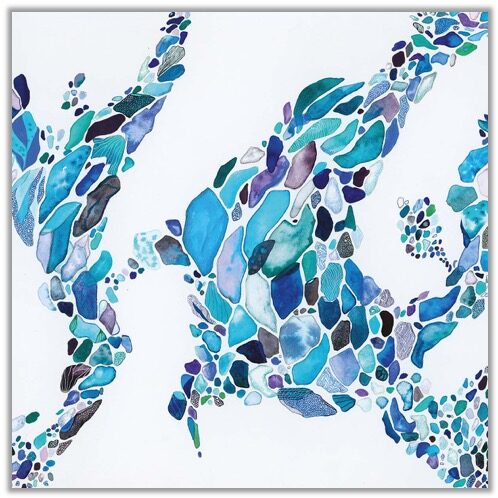 Then there is the touch of Ripperton in Azure that signs a perfect combination of sound elements, probably giving life to the best episode of this album: the beginning of the song is muted, with a convincing hype that moves legs, arms, head , heart and neurons, without neglecting the elegance and refinement that distinguishes Shades in its entirety.

Teal is an episode that goes a little further, that comes out a bit from the classic schemes to which Quarion has accustomed us with the other tracks on the album: it is an experimental piece, free of bass but full of atmosphere, a tunnel in which flashes of clap arrive to bring glimmers of light here and there, a sort of prelude to what will be the final track. Cerulean is a worthy conclusion, it is a bit like a summary of a noteworthy album, where all the elements of Quarion meet: there is the powerful and pulsating beat, the hypnotic chasing of melodies in a loop, the evanescence of a dilated compositional structure.

As we said at the beginning, Shades is a mature, compact, conscious album, effective as a dancefloor instrument but also a listening album for lovers of intelligent techno, of which Quarion is a perfect representative.