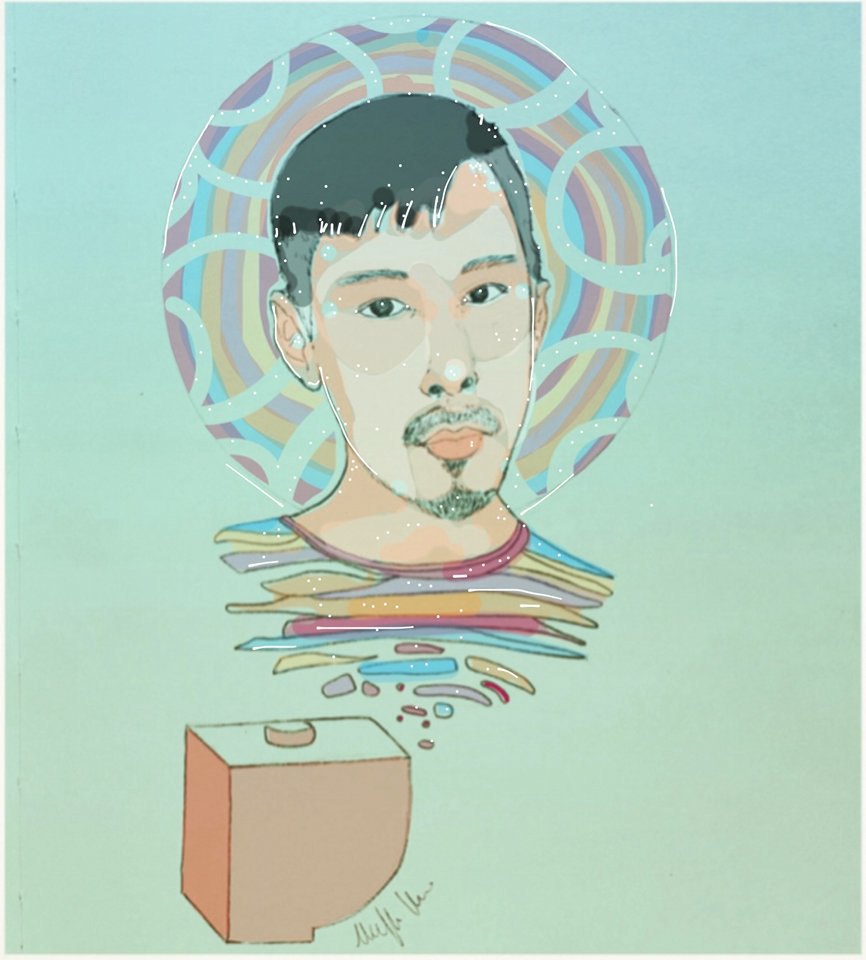 – Hi Daniel how are you? How your summer is going? Where are you now?

Hi! I am in Los Angeles.  I played at BEARS IN SPACE party for my good friend Chris Bowen. I just spent a week in San Francisco  before that with my brother and cousins who all live there…

– California, Taipei, California again and then New York, living and studying around the world, you such as a “son of the world”. How all these different places have influenced your approach to the music and your musical growth?

Yes, it seems that my life has taken me to many places, but that also seems more normal nowadays with globalization, no? I don’t remember so much about my childhood in California, but from age 7 to 14, when i lived in Taiwan, i learned Chinese and French in the two schools i attended. In our international school we had some great teachers – Americans who had traveled the world a lot, who obviously had an “alternative perspective” on arts and culture, and my music teacher probably had a big influence on me. She would turn out the light, make us take off our shoes, we listened to ethnic musics, Fleetwood Mac, we sang traditional gospel songs and pop songs.  She is still teaching at age 80+, in Kenya I think!

Living in New York 1994-2003 was obviously another big classroom of Life.  I met such diverse people — dancers who had been to Paradise Garage, musicians who had played on famous pop and jazz albums, fashion stylists and designers, as well as other dreamers and crazy types of all races and cultures. Not like on TV shows like SEX AND THE CITY or FRIENDS, which are essentially materialistic and racist (sorry! it’s true) reductions of a much more complex urban landscape.

Of course i am concerned about racial or cultural injustices, but in the realm of music, i believe much more in the universal.  Living in many places and seeing how people around the world react to and participate in music is probably the greatest lesson for me…

(I am NOT concerned one bit about Europeans playing African drums or dressing up as Geisha, haha !!  Everybody should participate and learn from others.)

– In 2003 Berlin, why Berlin and why a “techno dark” city for a disco dj like you? What do you love and hate about Berlin?

Hmmm Berlin. Love and hate? I don’t “hate” very much about Berlin — I think it has certain characteristics which reflect its particular history, and the more you travel the world, the more you realize that the “imperfections” of one city are also often “virtues” — annoying Americans like to complain about Berliners having “no fashion sense”, but that down-to-earth lack of style is for me the opposite of the rampant materialism and anxiety over appearances which the American media is constantly pushing onto other countries.

I love the nature, the open spaces, the architecture in Berlin, and frankly I really do like the people.  The building i live in is full of former East German citizens, and they are overwhelmingly honest, approachable, earthy, warm.  Of course i enjoy the nightlife and all the new restaurants in Berlin too, but those consumable things are less important than the spirit and the space.

But to me, it is also unfair if all these young “expats” move to Berlin now and don’t make any effort to learn and integrate.  There are many restaurants and cafes where the staff only speak English, and that is problematic, even rude.  If you live in ANY city, you have to participate in it and not only consume it.

– Let’s talk about parties in Berlin, we know that “Cocktail d’Amore” is one your favorite, true?

I love Cocktail of course!  But honestly, i have been enjoying the parties EVERY time i go to Renate, to Tresor, to About Blank (with its monthly gay BUTTONS event), to the new Paloma Bar… and even Lab, the gay sex club under Berghain — it’s a great place just to socialize too.  Berlin nightlife still lives up to its promise (if you don’t wait 4 hours and then get rejected)!

– In 1993 you founded your own label Balihu Rec. thanks to your strengths and savings (DO IT YOURSELF) and pushed by the desire to bring something new to the dance scene in New York. Would you like to talk about that period and your first releases? Do you have any future projects for the label?

Balihu Records was very naive, very technically and musically primitive, but that was also its charm.  I mean, if you listen to that first release, it’s all monophonic and the synth string was even out of tune.  In my mind, i see it as a finished phase in my life.  But i am grateful for it because, again, it was like a classroom for me.   I am working on new tracks now at home and I hope that the results speak for themselves!

– 1976 – 1984 “the gold age of the Italodisco”, a period that has influenced you and your career and now it looks like disco is back, how do you consider going back to the disco music? Especially for you that have always been living of disco music! Who are your favorite italian disco dj, from whom you get inspiration?

Italian DJs — obviously hearing tapes from Daniele Baldelli AND being live at events to hear Beppe Loda have all been super inspiring!! They have different styles, really, there is no need to compare.  And of course those 1978-1979 records produced by Celso Valli are amazing, like Azoto, Tantra, etc.  I don’t see Disco as only retro.  BeeGees and Donna Summer yes, there is nostalgia, but a record like UNDERWATER by Harry Thumann is simply a technical masterpiece which transcends time.  It has all those mechanical AND acoustic elements which make all pop and dance music amazing… if anything, it is far more advanced than most of the pop or dance music made nowadays on laptops. A great string arrangement or sax solo or great chords do not lose their value over 30, 40, even 120 years.  Just like Chopin or Bach.  I think there are still a lot of possibilities for new, entertaining, amazing dance music, but the producers must master both the musical theory and the techincal production, which is difficult.

– Your music and your dj set are a mix of different cultures, you always put together afro and latin sounds, percussions and violins, with some classic music influences as well. The music has always been a big message of integration between different people, do you think that, during this very risky period in term of immigration, the music can do something?

Hmmm, i don’t see it as necessarily a political or cultural message for THIS decade in particular.  Even in the 1920-30s, American jazz music was speaking for integration of European musical scales and African rhythmic aesthetics; Antonio Jobim once said that Bossa Nova was Chopin’s pianos played with the Samba; even Rock N Roll in the 1960s was an incredible hybrid.  Of course, the grand vision of using European orchestral sounds over fierce Afro-Latin percussion, like Salsoul Orchestra, that was probably the highest point of this idealism, and  it’s still my own ideal too.  But with music, like with other arts, it is not only the size which counts.  It is in the concept, execution, nuance.  A lot of big orchestra disco tracks from the 1970s also were flops.  Each piece is an individual endeavor, each piece is produced and judged on its own merits, in the end.

– Last but not least, your favorite pizza?

Pizza!  I love it, but i am lactose intolerant (asiatico), so i always take a simple Marinara (olive oil and tomato) or with Anchovies and Capers!! (is that roma? or napoli_)

– Thank you for your time Daniel, see you soon and keep rocking!

Thank you Domenico and Polpetta!